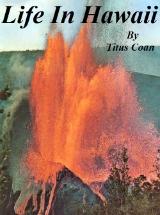 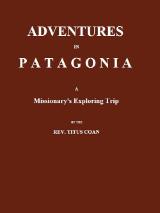 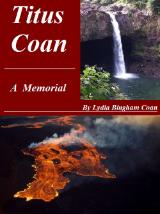 "Life In Hawaii" - His autobiography full of vivid word pictures of missionary life, his relationship with God, the native people and culture, their kings and evolving government. It also includes a chapter on his two visits to the mission in the Marquesas and six chapters of his experiences with volcanic eruptions on Hawaii Island.

"Adventures In Patagonia" - Before leaving for the Hawaiian Islands Coan lived with a primitive tribe in the southern portion of S. America for almost three months. The introduction (not by him) is a short biography of his life...

"Titus Coan - A Memorial" - Although written by his second wife after his death, the book is largely a compilation of his own journal entries and letters followed up by letters of others in memory of him.

Letters and Journals - Coan loved to write and was blessed with the ability to "Pen Paint" vivid pictures for the reader using words. He had well over 400 correspondents he wrote to and penned close to 3000 letters to them. He also wrote articles for missionary magazines and scientific journals. He also kept private journals. Letters of note will be linked to from or posted to this page. Many of his hand written letters (some which have been typed out) are held at MissionHouses.org in their digital collection.